All performances will be held at Saratoga Arts, 320 Broadway, Saratoga Springs, NY 12866 unless otherwise noted.

Book by Arthur Kopit;
Music and Lyrics by Maury Yeston; Adapted from
the Italian by Mario Fratti

Nine is the spectacular musical adaptation of Fellini’s 8 1/2. It features one man and the myriad of women in his life. Celebrated but impetuous film director Guido Contini, succumbing to the pressures of filming his latest film epic, suffers a midlife crisis. One by one, women from his past and present – including his mother, his wife, his mistress, and his leading lady – haunt, instruct, scold, seduce and encourage him until he finally learns to grow up.

In this scented case of mistaken identity and letter writing, two feuding perfume clerks have no idea that they are in love. She Loves Me showcases a small but strong ensemble cast playing a range of memorable characters of all ages – and each with their moment to shine. She Loves Me is an intimate and touching show, featuring music by Jerry Bock and Sheldon Harnick (Fiddler on the Roof) and book by Joe Masteroff (Cabaret). Considered by many to be the most charming musical ever written, She Loves Me is a warm romantic comedy with an endearing innocence and a touch of old-world elegance. The Mikos Lazlos play Parfuemerie, on which it is based, has inspired many adaptations, including the beloved films In the Good Old Summertime and You’ve Got Mail.

Buy She Loves Me Tickets

Jim Fingal is a fresh-out-of-Harvard fact checker for a prominent but sinking New York magazine. John D’Agata is a talented writer with a transcendent essay about the suicide of a teenage boy—an essay that could save the magazine from collapse. When Jim is assigned to fact check D’Agata’s essay, the two come head to head in a comedic yet gripping battle over facts versus truth.

Buy The Lifespan of a Fact tickets

‘Night, Mother is a winner of the Pulitzer Prize for Drama.
The scene is the living room/kitchen of a small house on an isolated country road, which is shared by Jessie and her mother. Jessie’s father is dead; her loveless marriage ended in divorce; her absent son is a petty thief and ne’er-do-well; her last job didn’t work out and, in general, her life is stale and unprofitable. As the play begins Jessie asks for her father’s
service revolver and calmly announces that she intends to kill herself. At first her mother refuses to take her seriously, but as Jessie sets about tidying the house and making lists of things to be looked after, her sense of desperate helplessness begins to build.

The final collaboration between Rodgers & Hammerstein, The Sound of Music was destined to become the world’s most beloved musical. Featuring a trove of cherished songs,
including “Climb Ev’ry Mountain,” “My Favorite Things,” “Do Re Mi,” “Sixteen Going on Seventeen” and the title number. The Sound of Music won the hearts of audiences worldwide,
earning five Tony Awards and five Oscars. The inspirational story, based on the memoir of Maria Augusta von Trapp, follows an ebullient postulate who serves as governess to the seven children of the imperious Captain von Trapp, bringing music and joy to the household. But as the forces of Nazism take hold of Austria, Maria and the entire von Trapp family must make a moral decision.

A note on parking:

Parking in downtown Saratoga can be a challenge. Please allow extra time to find parking when attending our performances..

For those with mobility issues or in need of accessible parking: The Saratoga Police will be posting “No Parking by Police Order Friday, Saturday and Sunday” signs in front of Saratoga Arts on Broadway. These signs are being posted for US to make use of the space for a drop off zone and additional accessible parking. We will have Home Made Theater Patron signs for you to place on your dash board or under your wipers to allow you to park in this area. A Home Made Theater representative will be available to assist you.

Thank you for your patience and understanding.

Make a donation to Home Made Theater

A drop off zone will be available directly in front of the Saratoga Arts building.

There are several free parking options near Congress Park:

Putnam Street Parking Lot – 11 Henry St, Saratoga Springs, NY 12866
Putnam Street Parking Deck – 21 Putnam St, Saratoga Springs, NY 12866 (Two level parking structure, second level is only accessible from Phila St.)
There is all-day parking on either side of the dead end street that goes into Congress Park from Broadway, (please note: do not unload your work from this side of the park, you must load in from the Spring Street entrances to the park)
Street parking is available on most streets around Congress Park
Please pay close attention to all parking signs! Not all parking spots in these locations are all-day parking. If you park in a 2-hour spot and do not move your car, you will get a ticket!

Covid-19 Safety Protocols
If you cannot, or are not willing to, adhere to these protocols, please do not plan to attend the live performance. If you are purchasing tickets for others, you agree to inform all members of your party of these protocols. Thank you for your cooperation. These protocols are subject to change and will be updated as the situation warrants.
Check in:
All cast, crew, volunteers, and staff have been vaccinated.  Hand sanitizing stations will be provided. All audience members are REQUIRED to wear face coverings (mouth and nose) at all times, regardless of vaccination status while in the building. All staff, crew and volunteers will be required to wear face coverings (mouth and nose). Performers will not be masked.

Get the best seats at the lowest prices with a subscription to Home Made Theater! 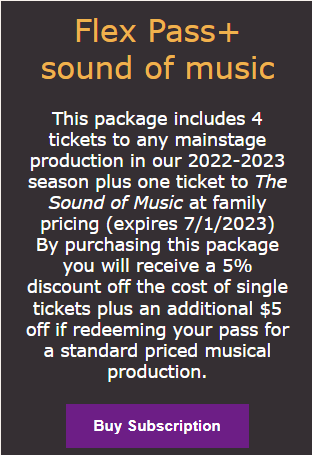 All purchases are subject to a $2.50 processing fee per ticket.

All ticket purchases are final; no refunds or exchanges*.

Individual tickets are $30 for non-musicals and $35 for musicals, unless otherwise noted.

All purchases are subject to a $2.50 processing fee per ticket. A $2 Facilities fee is included in all ticket sales.

Discounts: Due to limited capacity, we are unable to offer discounts, other than subscriptions, at this time.

All ticket purchases are final; no refunds or exchanges*.

Give the gift of theater!

Holiday, Birthday, and Any Occasion Gift Cards are good for single tickets to Home Made Theater mainstage productions (Special events and fundraisers excluded, not redeemable towards subscriptions).

Gift cards can be purchased in any amount of your choosing. Use the chart below as a guide when determining the amount to purchase*.

$35=an adult ticket to a musical

$30=an adult ticket to a non-musical

Why buy as a group?

Ready to book your group and pay now? Groups of 15 or more can be purchased by calling 518.587.4427 during normal business hours.

Want to make a reservation and pay later?

Groups of 15 or more can enjoy extended payment terms. Submit an online form for your reservation here or view a printable pdf form.

*Minimum may vary based on show. Show discounts can include restrictions, please see group policies here. Please note discounts are not available on special events or fundraisers.

At Home Made Theater, we believe in the ability of theater to entertain, educate and enrich people’s lives. For that reason, we are pleased to offer special student matinees. These weekday matinees are open to school groups only, allowing students an opportunity to broaden their horizons by experiencing the magic of live theater. Home Made Theater is pleased to offer special student matinee performances from time to time.

If your school is not able to attend a weekday matinee, and you feel your students may be interested in seeing our production, consider coming as a group to one of our regular performances. However, we hope that you will take advantage of our school matinee performances with discounted student group rates. Contact us at 518-587-4427 or info@homemadetheater.org for additional details.